As in the days of Noah, Ark Encounter and Getting True Hope 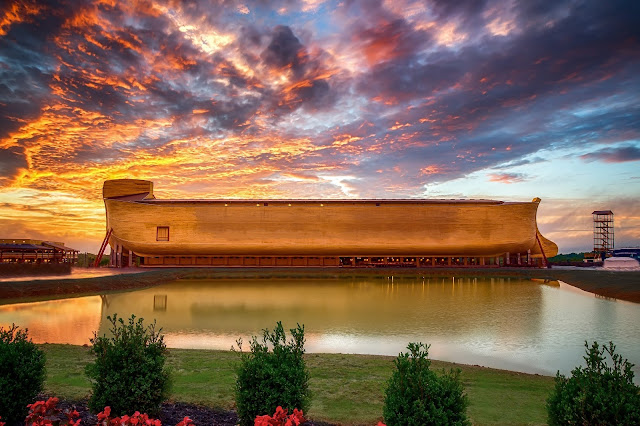 "Know this first of all, that in the last days mockers will come with their mocking, following after their own lusts..."   2 Peter 3:3

The Bible predicts the increase of scoffers and mockers of godly things in the last days.   The last days before judgment on the earth that will take place for mankind's crimes against a holy God.   However, there is a way of escape from the Judgment to come.   In fact, the very way of escape is generally the object for which the scoffers and mockers direct their attacks.     We are seeing this in many ways whenever the God of the Bible is mentioned as mankind's only source for hope or when the Bible itself is proclaimed as God's Word.  So it isn't surprising when another such attack is raised such as in the case of Ark Encounter.   You may have heard of it.    The Ark Encounter is a life-sized boat museum depicting an Ark like that of Noah, written about in Genesis 6-9.   This attack directed at Ark Encounter has caused quite a stir within social media and among bloggers alike.    It even caught the attention of Bill Nye (the science guy) as he recently visited the Ark Encounter for himself.
Now in the days of Noah, the Ark that God commanded Noah to build was to save any who would listen to God's warning of coming judgment on the earth and be rescued.  This judgment was to be in the form of a world-wide flood.   There hadn't been rain before on the earth and people wanted to do what ever they thought was right in their own eyes and so they did.  They scoffed at Noah for nearly 75 years while he built the Ark.   In Genesis 7 we read about the judgment flood that came and how only Noah's family was saved.    God promised never to send a world-wide flood again upon the earth and gave His rainbow as a promise.   (Genesis 9)
Today Ark Encounter is meant to stand as a warning of similar coming judgment on the earth and proclaim the Christian message of hope and salvation from God's promised wrath to come.   God is a God of true justice and holiness and evil doers will not go unpunished.   This includes lying, not putting God first, and lusting (adultery - see what Jesus said about this - Matthew 5:28).   God requires a payment (death) for the penalty of breaking His commands.    God is also a God of love.  (See how you do with the Good Person Test.)
In fact,  this message of love, redemption and hope may be considered foolishness to scoffers of God but ironically, despite people passing judgment on God for His coming judgment against evil, God is the one who provides the only Way of redemption in the first place!
More specifically God demonstrated His love when He filled a body in the person of His Son, Jesus Christ.   Jesus Christ paid the penalty for yours and my sin (the breaking His commandments).   So even though people make mock and scoff at this message, and the Ark Encounter for what it stands for, only one question still remains that we each must answer before we die.   If God's judgment against sin is real and hell exists as Jesus said (Matt. 5:22-30, 10:28, 23:33),  what will happen to you after you die?
Get true hope and get rescued, before you run out of time.